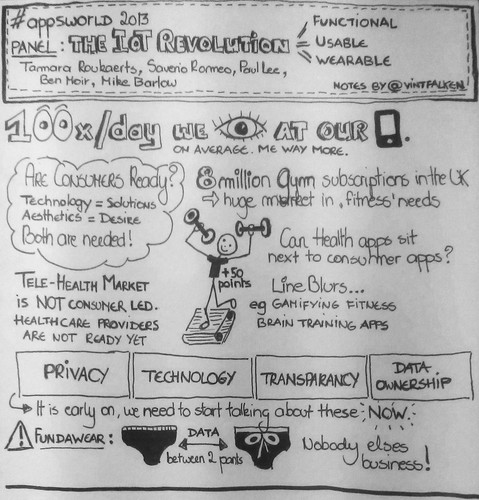 Sanjay points out some of the issues related to the Internet of Things.

Myself? I’ve been mocking it for some time because I remember the whole ‘Web2.0’ fad. What is the Internet of things other than Web3.0? And like Web2.0, most of it is crap. Complete, utterly useless, crap. It comes disguised as useful, like an infomercial product.

And some of the utterly useless crap for you is just an invasion of a privacy that you didn’t even know you had.

Which, of course, is part of the problem with big data anyway. Target could tell someone was pregnant (really), but what is the actual value of that? So that someone can sell baby stuff to people who don’t know that they are pregnant yet? The odds of women doing that does seem slim, but I’ll be the first to admit I don’t understand women. I have references.

Last weekend, I was coughing. My Amazon Echo might have been listening -what are the odds that my Amazon Kindle would start showing ads for Mucinex?

Wow. Targeted advertising, right? Awesome, right? Some people might think so, but here’s the crap part of that ‘awesome’. Am I going to order Mucinex from Amazon.com? Or, if I needed it, wouldn’t I go somewhere that I could get it immediately?

If IoT means being sick for an entire day while waiting for Amazon to drop off some drugs in my mailbox is about as Darwinian as you can get. I’m sorry, that’s just pretty dumb.

When you get down to it, what’s this ‘hook anything up to the Internet’ really going to do? It’s going to make some people quite rich. That’s about all. The odds are good you’re not going to be one of them.

When you can use technology to do useful things, I’m game. And that’s why you don’t read much about IoT here.

If you must do IoT related stuff, have the good sense to read Sanjay’s article.

Over about 20 years, Sanjay Pande has remained one of the best tech friends whose hand I have never shook.

One thought on “The Internet of Trivial And Big Data”