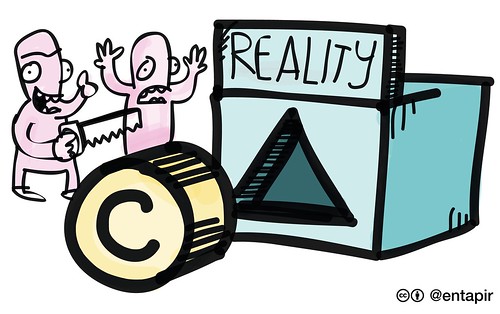 There’s a new advocacy group lobbying for the right to repair everything. It’s not so odd that I found this the same week that Apple will brick (make useless) your phone if you get non-Apple repairs.

It’s not a coincidence. There’s a quickening. Just recently, General Motors (GM) told consumers that they don’t own their cars. They license them.

Why? Because profit. Share prices. And maybe even that 401K you’re letting someone else manage is applying the pressure to the companies to make larger decisions like this. Or maybe it’s just the way things go, like when Dell was nasty enough to make sure that it’s computer components were compatible with off the shelf components. I don’t know if they still do it, but I still won’t buy a Dell. Sadly, I use one at work because… low cost. Warranty. Convenient for companies.

Most people who don’t fix things may not understand why all of this is important. Most people run screaming from anything that blinks 12:00 at them – which is kind of understandable because that was a horrid design from the start (what, no battery? Really?). But non-technical people don’t want things that blink at them expectantly.

People want their cars to run. They want their computers and software – to them, they are sometimes the same thing – working so that they can do whatever it is they wish that apparently includes malware. They don’t want technology, as Douglas Adams wrote. They want stuff that works. So why is this so important?

What people need to  understand is that the idea that you could pay for something and not have anyone but the seller repair it could be a win for everyone except for one thing: Things inconveniently break, and warranties aren’t always as long or as inclusive as those that paid expect them to be.

Ask anyone who has been to a car dealership with a problem, or has had to return a device they got.

Repairing things, be it on your own or in your local area, is a handy thing that enhances a local economy, develops intellectual capital in a geographic (and geopolitical) area. Sure, Cuba’s been embargoed so long that many people don’t know why – yet they have cars from the 1950s driving around. Why? Because they fix their own stuff.

For those of us from the the 70s and before, that was simply a fact of life.

Now we have manufacturing life cycles.

Probably before the moment you started hearing about a life-time warranty, this was reality. The days of building things ‘to last’ had passed into the days of manufacturing things ‘to last this long’. Really, it’s not all bad, but in doing this in conjunction with Copyrights and Patents assures that no one can repair but those that are authorized.

To those of us in the software world who have been paying attention, this is nothing new. Famously, the Free Software Movement began when Richard Stallman (RMS) was unable to fix someone else’s code. The Open Source Initative splintered over distinctions in defining whether people could lock the source code away or not. There are plenty of opinions on that, and I do have one, but suffice to say that while distinctions are made between the two, the overall philosophy is largely the same. Both sides would argue with me.

Software itself suffers entropy. It gets more complicated no matter how hard you try for it not to – except maybe Solitaire and Notepad.

So people fix software if it’s worth it to them. Like a car, if they want to spend the money to get something fixed, they can – except maybe in the near future. I wonder how they’ll handle the performance market, the tuners, etc.

The point is that what started off as just software has become seen in just about any field. And it’s why Repair.org exists now.

The focus is on a few different industries:

I just joined as an individual member. I’m not going to make money off of my membership, and neither will you. But you may be able to help make legislation such that you’re not stuck with items that can’t be repaired or modified.