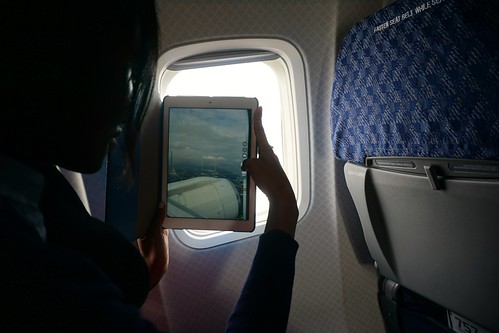 I met her and the young Brazilian woman on the flight from Miami to Orlando, this young Doctor who had an interview in Ocala. She was to drive across to Ocala, to the East, to see if she would get the job. She didn’t look old enough to be a Doctor, but I’ve passed the age threshold where doctors were younger than myself years ago. We talked about medicine and medical administration for a while even as I checked up on the nervous Brazilian high school graduate. I sat, a thorn between two roses, all the while thinking:

What sort of world were they entering? Doc Leia, a graduate from The University of the West Indies, off to Ocala, and the young woman to my right, off to see the sights as a reward for having survived so many years of schooling. They were both easily younger than most of my nieces. The Doctor had already become heavily invested in her future – medical school was a daunting path and might have been one I would have pursued with the right opportunities. The other was about to invest in her future and it bothered me that there wasn’t as clear a path as there used to be.

Artificial intelligence – diagnosing patients on the other side of the world – is promising to change medicine itself. The first AI attorney, ‘Ross’, had been hired by a NYC firm. The education system in the United States wasn’t factoring this sort of thing in (unless maybe if you’re in the MIT Media Lab), so I was pretty sure that the education systems in the Caribbean and Latin America weren’t factoring it in. I’ve been playing with Natural Language Processing and Deep Learning myself, and was amazed at what already could be done.

The technology threat to jobs – to employment – has historically been robotics, something that has displaced enough workers to cause a stir over the last decades – but it has been largely thought that technology would only replace the blue collar jobs. Hubris. Any job that requires research, repetition, and can allow for reduced costs for companies is a target. Watson’s bedside manner might be a little more icy than House, but the results aren’t fiction.

What are the jobs of the future, for those kids in, starting or just finished with a tertiary education? It’s a gamble by present reckoning. Here are a few thoughts, though:

Even with that, even as fast food outlets switch to touchscreens for ordering their food (imagine the disease vectors off of that!), even as AI’s become more and more prominent, the landscape is being shaken by technology driven by financial profit.

And I don’t think that it’s right that there’s no real plan for that. It’s coming, there is no stopping that, but what are we as a society doing to prepare the new work force for what is to come? What can be done?

One thought on “The AI Future On Mankind’s Canvas”