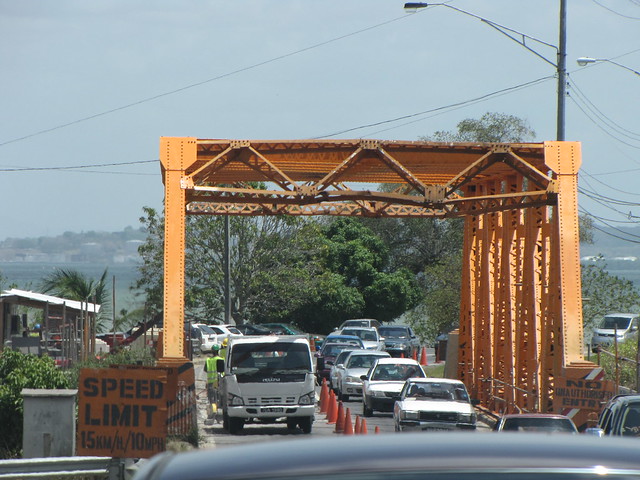 Mosquito Creek, in Southwestern Trinidad, could be a comedy of errors committed by a confederacy of dunces over decades. To locals who have to trek through it daily, it is much the same without the comedy. It has moved from drama to the mundane, a tribute to how things do not get done in Trinidad and Tobago.

And recently, the flooding. In fact, I’m tired of writing about this over the years – the picture is from 2010, which is by no means when this all started – I just happened to have the picture. And the reason I write this? A video that I have been tagged in on Facebook so many times that I tire of responding to it.

The video proffers a solution to flooding on Mosquito Creek that is not expedient, that is flawed in that it doesn’t actually resolve anything other than adding a few man-made reefs to the equation. That it is so popular is a testament, I suppose, to the cultural inertia regarding projects done by any government: Plans cannot be changed.

But plans need to change. The roadway exists between marsh and sea, with the Godineaux river entering the Gulf of Paria. And flooding, dear reader, is about flow rates.

We’ve all experienced a clogged drain – where water enters by faucet faster than it can exit the drain. The sink floods. It’s this level of thinking that has people coming up with things that they think are solutions, but they don’t seem to understand the greater issues involved.

First and foremost, the road is not a natural addition. Use over the decades has compacted soil underneath, which means that water cannot naturally flow between the marsh and the sea. When it does, we call it flooding only because we built an easy road for expediency that has increasingly become more painful to use and maintain.

The right answer is to do an overpass there and allow the water to do what it does: enter and leave the mangrove. Why is this important? Because the Godineaux River cannot always push water out – it’s a clogged drain – and for those of you with a fairly modern sink, you might find under your faucet the overflow. The mangrove to sea path is the natural overflow. This is just basic science applied with common sense, something that the Environmental Management Agency and Ministry of Works and Transport should have on tap through at least one person that is listened to. Lo, this is not the case.

So what happens when we get heavy rains in poorly developed areas (they are) that tries to get out to sea in that path? Blocked by the road, the water has no choice but to go onto the road. Thus, flooding.

Plus, too often do we forget that drainage in Wet Season has to be balanced by water retention during dry season. Streamlining waterways will make for drier soil during dry season, and this turns to dust and dust blows away. Soil erosion by wind, and farmers have less water for their crops.

As Trinidad and Tobago has developed haphazardly, where Town and Country operate at a pace that snails laugh at, people do their own development without thought to the bigger picture. Even with approvals, some suspected to be assisted by a bit of grease to the wheel, you’d think that the EMA and Town and Country would require retention ponds to balanced reclaimed land. One would think.

So while we complain about a major artery of traffic for South West Trinidad, the real problem is much more complex. The solutions are simple.

Sufficient retention ponds along waterways to accommodate flooding. The road on Mosquito Creek Creek should either be rerouted or made into an overpass to let things flow more naturally below the road – not that we’re particularly good at building and maintaining roads in Trinidad and Tobago. And what does this require?

It requires people with common sense and a working knowledge of science to be in the right places, focused on the greater good instead of the personal good or expedient. Ultimately, that seems to be the real failure.