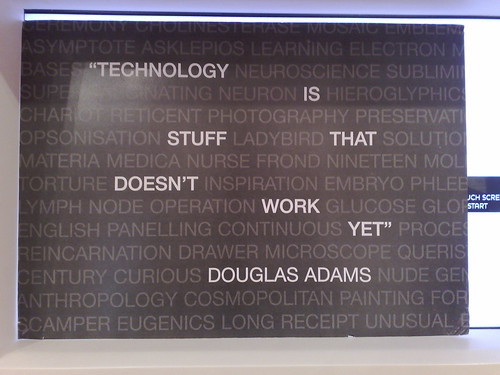 One of the things about the writing of Douglas Adams is that he had a keen eye for what was happening around him and could express it briefly: ‘Technology is stuff that doesn’t work yet.’ You can think about that statement as long as you want and find no real fault with it.

Consider this: We don’t talk about fire technology. We don’t discuss wheel technology unless we’re dressing up a car, and speaking of which, most people are completely oblivious to internal combustion engine technology.

As someone who, since 11, has been working and playing with technology, and who works in technology to this day, I have to admit being a little disappointed with our body of achievements in the last 33 years. OK, personal computer technology is no longer a catch-phrase, and internet technology is a phrase maybe used by the people who the geeks don’t want to work for. Electric cars, sure. But really, as someone who has always been involved in technology – from electrical to electromechanical to personal computing to nuclear to medical to military to medical to financial to document management to internet to…

Well, that’s the problem with defining yourself with ‘technology’. Technology is the stuff still being worked on. It’s not done yet.

Some of us have to get it done, but we miss all too often – a sore point with me, where we write software that doesn’t really do what we want it to do. 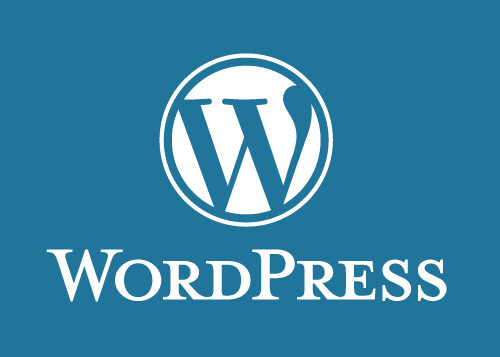 A little over a week into it, and a few posts down, I can say that I can give some form of review on using WordPress.com. As someone who has been running his own Drupal sites for over a decade, and as someone who just wants to log in and write when I have the time…

Yeah, this is so much less masochistic. The entire backend of the blog is straightforward and doesn’t require layers of documentation (or a decade of experience) to understand. It doesn’t do all the things I was doing with custom modules with the Drupal sites.

Here’s the thing. The amount of management per feature is much more manageable than running my own Drupal site. This is not a ringing endorsement of WordPress over Drupal, but it is one for my particular use case.

Updates automatically go to my social media sites. It took me all of 14 minutes to set that up, and it took that long because I change my passwords and sometimes forget them.

Windows 10 is a scary beast. Forget the ‘keylogger’ issue, which has been exaggerated, but instead all the fun things that Microsoft is doing with it.

They don’t log everything. A minor blessing if you accept logging, but a travesty if you really don’t want to be logged at all. I’m firmly entrenched in the ‘mind your own business’ camp.
There are very real issues, though. Some examples:

So… yeah, I think it’s time for me to get off the Windows platform once I’m done with the sole Windows 7 system I have. Everything else is Linux or Android. Sure, I can work on Windows at work, but at home… my house, my rules.

Not, “my house, Microsoft rules”. 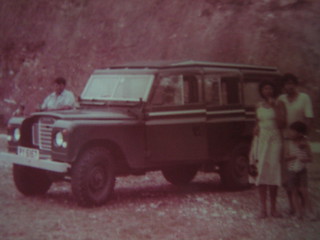 A friend and I were talking about how technology companies can be stressful when the old Landrover came to mind.

When I was a kid, my father and his younger brother took both of their wives – and me – down to Trinidad and Tobago and drove the old family Landrover around with me in the back.

Now, in the back of that model of Landrover, the brilliantly dull engineers that designed it had placed the rear axle and rear seats strategically such that there was no comfortable way to sit. Further, the roads in Trinidad and Tobago, even to this day, are not designed for a glorified internal combustion chariot with no suspension.

So it was quite uncomfortable. And at times, one could be in midair pondering how you got there before gravity killed the suspense. They adults would take turns driving, noting it with a precursor of, “Switch Drivers!”

Sometimes that’s what it seems like when you work at a technology company. It’s tough enough to contend with so much competition in the industries of technology, and then to predict where you’re going to be has dependencies on whatever technologies you build on. And it’s like building a house of cards in the back seat of a Landrover.

Cost of the industry. But sometimes you still want to shout, “Switch drivers”. And sometimes you should. Sometimes the company needs to understand that if the goal is to deliver quality in the back seat of a Landrover, you don’t have it bouncing around. Find ways to make the ride smoother. 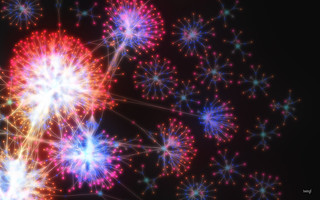 Just this past week as I committed to the Pine64 cluster I’ll be building, I was looking at new ways to crunch some data. As such, I was looking into clustering and databases, something I haven’t done before.

Meanwhile, a Microsoft SQL Server DBA told me that some company had made a claim that they could import millions of records in minutes, or something along those lines. He was of the opinion that it was impossible. And here I am thinking about clusters and data, so I said, “ya know, if they cluster the databases they could get throughput that might allow for that…”

I’m not a DBA. I don’t play one on the internet. What I know of databases is limited to what I have used them for in the last 2 decades, and I have no real experience with clustered databases – but it stood to reason to me that a well designed cluster would have more throughput ability. That’s just a theory because of my limited experience, so… because I’m finally able to focus on writing and researching rather than updating my old site… I did some research this morning.

It ends up my MySQL bias shows a bit here not because I think it’s the greatest thing in the world (far from it), but because most of my experience revolves around it – and that biased my research. When I tried looking into Microsoft SQL Server clustering I found nothing I was looking for but plenty I was not (the Microsoft method of emulating Linux and making it worse). I gripe, but hey, I have a bias and let you know.

Here’s what I found.

‘Where would I use a MySQL cluster?‘: Interesting read and links.

‘MySQL Cluster Features & Benefits’: OK, I have to admit a few geek-gasms in here as I was exploring in the context of my own cluster, but a young software engineer who I respect has been waxing poetic about MongoDB, too, so I’m not done yet. I have until April 2016 anyway.

‘MySQL Cluster – When to use it and when not to‘: A wake up call; it’s only a presentation teaser and yet it manages to say a lot more with a lot less.

That’s just some stuff on MySQL.

So, in the end, I stand by the theory that a clustered database can get much better throughput than the traditional systems, and I don’t know why that seems like a stretch for some.

But I also know that I’ve only scratched the surface and that I have to dig deeper on that. My preliminary reads on MongoDB and Production sharded clusters make that also very interesting.

I have no problems about case sensitivity. It’s likely because I’ve spent so much time on *nix that it doesn’t matter to me, but recently a friend – a SQL Server DBA-of-many-other-hats made a slight gripe about it over lunch. She was almost apologetic about supporting case insensitivity, and as simple as that its, it bothered me because I really had no defense for case sensitivity other than I’m used to it.

In fact, I’m still the guy who cringes when he sees a single character variable – the infamous ‘i’ in loops because it’s a pain to grep code for that. For my sanity, please use ‘ii’.

I googled around this morning because I was trying to better understand her perspective, and voila – Coding Horrors covered case sensitivity issues well back in 2005.

Yes. It’s bad on Productivity. I have to admit that. I’m pretty disciplined about it, but yes… I see it now.

So, yes, while I’m used to case sensitivity, I grok why it is an issue… it’s just been sort of a thorn in my hand I have grown used to.

Fortunately I’m not a complete idiot and don’t cherish it. 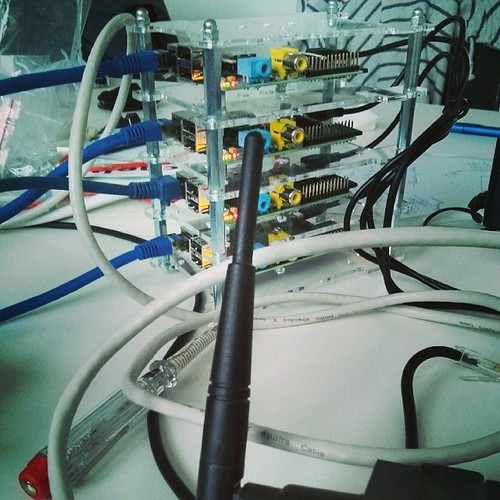 I recently backed the Pine64 platform on Kickstarter. Choosing the hardware platform for my next cluster was not as much fun as I would have wanted, but fortunately Jon ‘Maddog’ Hall helped steer me from a bad decision or two on Facebook. His post on the Raspberry Pi Zero is well worth the read for those of us who want to focus on the code rather than the hardware.

It’s also what I would call a good start. Having built a few clusters, this is well in my comfort zone. It’s not in everyone’s comfort zone, though, but it could be. This Make step by step instruction list for building a 4 Raspberry Pi cluster makes it simple for someone to start.

Clearly, I have some greater aspirations than 4 nodes. I wanted my next cluster to be 64 bit because I want the processing bandwidth. For what? For cool geeky stuff! I have ideas I want to play with.

But why would you want a cluster? Read this and decide.

It’s really no surprise. The only way to make money off of content is to own your own infrastructure, and the gorillas in the social networking background are making money off of other people’s content. OPC. And that allows them to negotiate better advertising rates than you, lowly YouTube channel owner, can negotiate.

This evening I was logging into my site and it hit critical mass. Unreferenced tables in some MySQL table. I’d just written about not wanting to do updates and simply focusing on content just a few days ago.

I was on the recliner, my Echo was playing Marillion’s Montreal, and as I looked around for something else, the title of this post came up in the lyrics.

17 minutes later, I had a WordPress managed site. Years and years of Drupal, managing my own site, etc. Sure, I paid. When I want to write, I want to write. Drupal had become too bulky for me to manage despite their best efforts otherwise. Well, maybe not their best. They’ve had other priorities. I am not one of the priorities.

But this isn’t about Drupal or managed WordPress sites (I didn’t sell out, I bought out). It’s about technology getting in the way, and it’s probably one of the things I hate the most about the world.

I’ve been working in technology for decades now. Most of what I see these days is glaringly in the way. People playing on phones and ignoring the person in front of them. The miscommunications so easily had when reading comprehension and writing ability are ill matched. The way I get buried in tabs on a browser because the damned browsers are designed around a concept 21 years old.

The way emails pile up because of the ongoing saga of spammers and marketers – and the imaginary line between the two. The way a speakerphone can garble interactive voice recognition systems.

We, as a society, seem intent on burying ourselves in shells of technology.

That is going to be the key theme of my writing here, I think – at least for a while. Sure, there will be technical stuff I wish to share, but only because I don’t believe that we should be tied to technology in such a way that a digital Thoreau might laugh from the binary void, shouting “Men have become the tools of their tools.”